The case of the VMware vSphere Client

Today I connected with my laptop to VMWare Virtual Center using vSphere client. Because I had an older version of the client I needed to update and the installer failed with this message:

I remembered this error from the last install of this client (about a year ago), it happens because Microsoft Visual J# was already installed (in my case it was previously installed by Embarcadero’s Rad Studio).

Last year I “fixed” it by modifying the msi file but I remembered that Assarbad posted an easier solution on his Blog a while ago.

His solution was to set a public property in the MSI (USING_VIM_INSTALLER) but it means we need to unpack the installer exe first to obtain the MSI file.
END_OF_DOCUMENT_TOKEN_TO_BE_REPLACED

I wrote a tool to do just that ð
END_OF_DOCUMENT_TOKEN_TO_BE_REPLACED

END_OF_DOCUMENT_TOKEN_TO_BE_REPLACED

I was trying to create a (very) large Datastore on VMWare vSphere 4.1 but although VMWare correctly identifies the LUN on my SAN it refuses to create the Datastore and gives me this error: 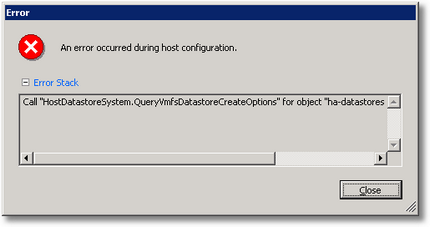 The complete error text is

END_OF_DOCUMENT_TOKEN_TO_BE_REPLACED

Default settings for the HP 8/20q FC SAN Switch are:

As you may have read I am currently implementing VMWare vSphere 4 on several HP Proliant DL380 G7 machines.

I ran across an interesting knowledge base article from VMWare that describes a possible issue that is summarized as “Power on and storage operations are slow with the HP Smart Array P410i controller“.

Essentially this just means a performance issue and the resolution is to install an extra (256 MB) cache module on the RAID controller.

If you are looking for the HP Simple SAN Connection Manager Software (aka HP SSCM) then you’ve come to the right place. HP seems to be really good at hiding their software on the web but I found it.

Go to http://www.software.hp.com/kiosk and user the following credentials to access:

Then you can download by clicking Receive for Free.

Just a reminder to Self for future reference, the default credentials for HP Storageworks P2000 (G3) are:

I have started the implementation of a VMWare vShphere environment in which we are going to use an Altiris server for Deployment. Since we are using HP Hardware I needed the HP Branded version of Altiris (it’s called HP Rapid Deployment Pack aka HP RDP).

I had some troubles finding the download spot for it, that’s why I am sharing it here. Hopefully it will save others from a long search!

Last time I needed HP RDP I just went to the HP website, clicked Support & Drivers then selected Download drivers and software and in the Editbox entered “HP Rapid Deployment Pack” which leads to this page: 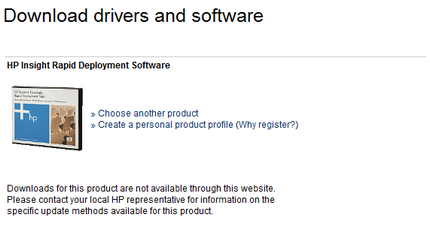