I took a look at the profiles first and noticed that the size growth was due to a Xerox subfolder in %APPDATA%: 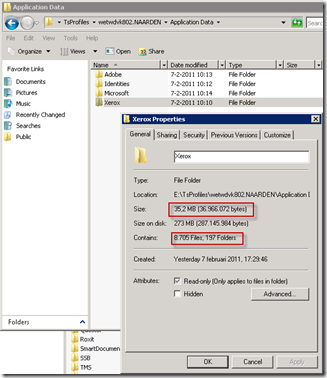 An even bigger problem is the huge amount of files in this folder (almost 9000) which of course causes the delay in the logon (while the server is loading the profile).

This is very bad considering that this driver, the Xerox Global Print Driver is advertised by Xerox as the Terminal Server/Citrix ready printer driver!

What makes it even worse is that the driver exhibiting this bug, is still the one offered for download on the Xerox Site.

I tested this version and the bug was fixed there, I cannot yet tell if the CPU Spikes issue was also fixed.

Here are the links:

But after installing this driver we also need to cleanup the (roaming) profiles to get rid of the Xerox folder.

I wrote a very simple PowerShell script for that:


2 Responses for "The Case of the Citrix Ready Printer Driver"