EDIT: See my followup article to learn how to reverse driver_auth.exe, decrypt and encrypt dell_wwan_sysID.dat.

This is a small expansion card that works together with the built in SIM card slot that is present in most Dell (Business) laptops. 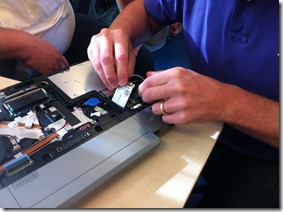 This SIM card slot is usually located near the battery compartment: 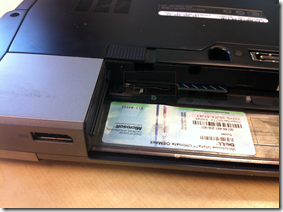 The card was installed in a few minutes since the antenna cables were present already and on my laptop I only needed to remove the backcover with just one screw.

Then I wanted to install the required software but this card is not officially supported in the M4500 (I bought this card because it was much cheaper on ebay).

So I took the driver from the M4400/Latitude E range, labeled R251153 but I got this error message when installing:

END_OF_DOCUMENT_TOKEN_TO_BE_REPLACED

I just read an answer on StackOverflow with this code:

Unfortunately it lacked explanation, so what does this code do?

It reads offset $4 from the Thread Information Block (the top of stack) into eax and then offset $8 (stack base) into ebx.

Then it substracts the two and moves that into variable eu, that’s all!

About a year ago I wrote a checksum calculator for the Volkswagen RNS 510 navigation unit.

The checksum is a variant on Crc16 and is present either at the end of certain files (eg #CRC16:db1d) or as a special file with the name CRC.16.

The tool is a little exe that takes the filename as the only parameter.

Have fun with it!

Renaming and hiding object in PowerPoint

I was working on a PowerPoint presentation that included screenshots that were using the Appear animation. I use it to only show a particular screenshot when I am actually talking about it.

However when editing the slide, the screenshots hide the slide text which makes it difficult to edit it.

And in the Animation Pane the pictures are shown as Picture1, Picture2 etc.

So I wanted two things;

END_OF_DOCUMENT_TOKEN_TO_BE_REPLACED

Using i-Clickr when you have no WiFi Connection

I started using the i-Clickr PowerPoint Remote iPhone App for my presentations recently. I like this app as it shows me the current (or next slide), annations and previous/next buttons: