I had to troubleshoot an application that was published with Citrix XenApp. The problem with this application was that it didn’t have an button/icon in the taskbar and the window would sometimes disappear.

I noticed that this (cr)application was written in Visual Basic, so I decided to run it through a decompilation tool.

The decompiler was able to list the forms used in the Application:

I inspected the main form and it showed the following properties:

Obviously I wanted to change ShowInTaskbar from False to True but the decompiler didn’t have an edit option. 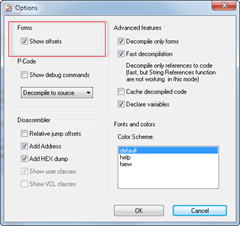 This made the Decompiler show the Hex Offset of the form in the exe file:

I opened the exe file in an Hex Editor and jumped to the form Offset. A Visual Basic form is a binary, undocumented format but in the Hex Viewer we can see how it’s structured. Taking the Form Caption (Title) as example we can see that it has Id 1, has a length of 0C (12) Bytes and the String is “Main Form”:

Luckily the author of the VB Decompiler has already done the hard work and has created a table of all the Id’s here.

This is a small part of the table, listing the properties I needed:

I saved the file and ran it through the decompiler again to verify the results:

Finally I tested the application and it worked fine now!