I first tested if the issue was caused by HDX Flash Redirection by simply starting the session from within an RDP session but the problem still occurred.

Multi Monitor Hook
When you are using multiple monitors with Citrix XenApp both screens are actually one big screen with the XenApp session. XenApp then uses a hook mechanism (DLL Injection) to simulate multiple monitors.

Without these hooks you will for example notice that an application doesn’t start on one of the monitors but on all or is centered on them.

To quickly test if this issue was caused by the Multi Monitor hook I configured the ExcludeImageNames registry key as described in CTX107825 which disables all hooks.

Since the problem still occurred I concluded the issue was not caused by the hooks.

Windows Presentation Foundation
Because I needed to find the process names for the afore mentioned ExcludedImageNames key I noticed that there was a process called Presentationhost.exe: 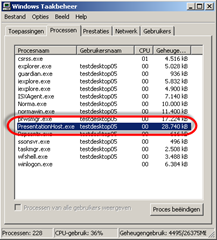 A google search for Presentationhost.exe tells us that it’s the host process for Windows Presentation Foundation (WPF) applications that are hosted in a browser.

Hotfix
So my next search was “Windows Presentation Foundation Screen Flicker” and the first hit was Microsoft kb955692: “Your screen flickers when you start WPF applications in a Windows Server 2003 terminal server session”.

The hotfix fixes the issue however:

Considering that WPF and the related ClickOnce Deployment were meant to enable users without administrative privileges to install and run web applications this is really a stoopid bug, in summary: WPF applications fail without write permissions in the %windir%\system32 folder!

ClickOnce
ClickOnce is an even bigger disaster in SBC because for every user the whole application (6 MegaBytes in this case) is downloaded into %userprofile%\Local Settings\Apps: