Method 1: Adjust DllCharacteristics field in the executable
The afore mentioned link on MSDN lists a procedure to set the TSAWARE flag when compiling (linking) an executable. But when can also set this property on binary (.exe) files.

There are various tools that can do this such as Microsoft’s editbin that comes with Visual Studio. In this example I will use NTCore’s CFF Explorer. 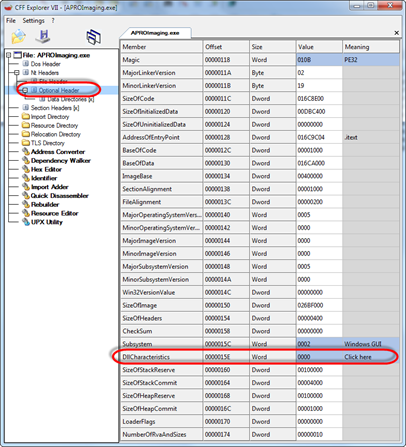 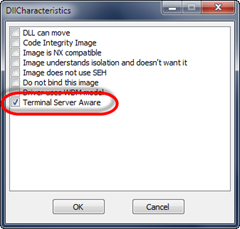 Now save and test the executable.

Method 2: Set Terminal Server Application Compatibility Flag:
This method has the advantage that it doesn’t need a modification to the executable. It does have to be set per server but you could easily do this with a deployment tool or script.

Open regedit and create a key with the executable name (without extension) under “HKLM\SOFTWARE\Microsoft\Windows NT\CurrentVersion\Terminal Server\Compatibility\Applications“.

So we create a DWORD named Flags and give the HEX value 408.

Or use the following reg file (don’t forget to change the executable name!):

With both methods the twain_32.dll will correctly load from the Windows directory!