Install Location
ClickOnce does this by installing all required files into
%userprofile%\Local Settings\Apps\2.0\<random folder>\<random app id>.

The <random folder> is composed out of the first 11 characters from the following registry key:

Assemblies and Components
Since ClickOnce is .NET framework technology, it’s likely that such an application comes with .NET assemblies (dll’s).

.NET Assemblies are usually installed and registered in the Global Assembly Cache (GAC) but since that requires administrative permissions they are simply places in the application folder.

Launching a ClickOnce Application
Finally a shortcut is created in the user part of the Start Menu to launch the application. The shortcut’s target points to an file with the extension "appref-ms". If we open this file with notepad, we can see that it contains the applications URL and the Application’s id:

The actual process, as visible in TaskManager, that runs a ClickOnce application is dfsvc.exe.

Option #1: Allow installation
If it’s allright in your environment to have the user install ClickOnce applications it’s a lot friendlier to give them a start menu entry than a hyperlink. Use your favorite UEM or even a loginscript to create a start menu shortcut and point it to:

Where the url matches what’s inside the appref-ms file and must end with .application

ClickOnce applications are hard to virtualize though. My first attempt was to use the normal capture process. But due to the launch process of ClickOnce application (through the Shell/Explorer.exe) you "step out the bubble" and therefore fail to load assemblies located inside the bubble. In my case the app just crashed but Event ID 59 was in the Event Log: 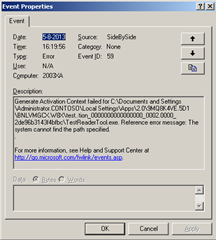 I troubleshooted this for a while and in the end the solution was so simple that it’s almost too easy!

You can simply pickup the whole application folder including all DLL’s and files, place that in the package and launch the exe from the folder…

To easily determine where the necessary files are you can used the mageui.exe tool from the platform sdk (I have attached this at the end of this post for convenience). Open the application’s manifest (usually named Appname.exe.manifest) and click the Files Tab: 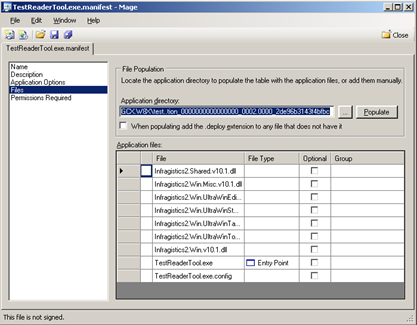 So collect those files, place them in a (virtual) folder of choice and use the exe listed as Entry Point. That’s it!

Option #3: Use a fileshare
Using the same method as option #2, just place the files on a network share and launch the files form there ð

Disable Auto-Update
I have not (yet) found a way to block updates on a ClickOnce application. If you do, please let me know so I can add it to this post!