MSDN is quite clear on Kernel object namespaces:

“A Remote Desktop Services server has multiple namespaces for the following named kernel objects: events, semaphores, mutexes, waitable timers, file-mapping objects, and job objects. There is a global namespace used primarily by services in client/server applications. In addition, each client session has a separate namespace for these objects, such as in Windows Vista.”

“The separate client session namespaces enable multiple clients to run the same applications without interfering with each other“.

Api Hooking
The Application Compatibility Toolkit has a shim to redirect Global to Local objects, called the LocalMappedObject but it is only applied for file mapping objects so this will not help us here.

The easiest solution therefore is to modify the api call using a mechanism called Api Hooking. From an Api Hook the \Global namespace can be replaced with \Local.

The most common method for Api Hooking is Dll Injection.

There is of course a risk that an Api Hook mechanism could be abused (e.g. someone replaces the Dll that is injected and thus the payload) or that antivirus programs will prohibit the injection.

Google Earth Fix v1
In the first version of my Google Earth fix I avoided Dll Injection by using a loader program. This loader would emulate a debugger and launch Google Earth as a child process (a debuggee).

As a debugger, it is perfectly valid to do typical debugger operations such as settings breakpoints, changing memory and writing in the memory space of a process that is being debugged.

This approach worked well but was more difficult to maintain as newer OS versions such as Server 2012 and Server 2016 had subtle changes in the assembly code of Windows Api functions.

In short: my fix broke on new OS releases and had to be modified each time.

Google Earth Fix v2
For this reason, I started thinking about a smarter, easier to maintain, approach and these were the design criteria:

This has resulted in a solution based on 2 components:

The driver needs be signed with a, kernel mode, code signing certificate. This is a normal Windows security requirement since Windows Vista.

This protects against any alterations of the driver

For further security, the driver will only inject a Dll that has been signed by theÂ same code signing certificateÂ as the driver itsself.

This protects against any alterations or replacements of the Dll

Easy Installation
To make it eas easy as possible to use the fix I have created an MSI installer for it. The installer will install the driver and configure it to inject only into the Google Earth process.

The installation directory is C:\Program Files (x86)\Remko Weijnen\Application Compatibility\ and in this directory you will find the driver and dll.

Uninstallation is of course supported and will stop and remove the driver before removing the files.

Using Process Explorer you can easily verify if the Dll has been injected into Google Earth. Active the Lower Pane with the View Dll’s options (Ctrl-D) and select the Google Earth process: 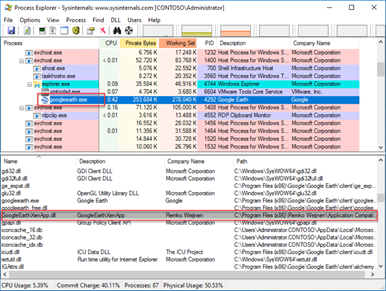 Supported Platforms
The fix has been tested on the following platforms: