The second resource, named 4 is probably carrying the payload and is encrypted or obfuscated: 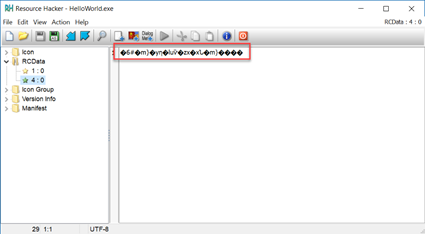 I saved the resource as a .bin file and inspected it with a hex viewer:

The code turned out to be AES encrypted and I wrote a tool to decrypt it. As the decrypted code had a comment line Code generated by:Â  SAPIEN Technologies, Inc., PowerShell Studio 2016 v5.3.130 I could conclude that it was compiled using Sapien PowerShell Studio.

I asked a few PowerShell people I know to test my decryptor and they came back with positive results. In this testing I noticed that there were some different variants of the code that Sapien uses and so far I have identified 3 different ones which can be decrypted.

One tester noted of a different tool, ISESteroids, that can also convert PowerShell scripts into executables. ISESteroids uses a different technique but the decryptor tool also supports it.

The decryptor has the following commandline arguments:

Note that the tool comes in both 32- and 64 bit versions so you need to use the one that matches your binaries bitness (else you will get a System.BadImageFormatException).

Here’s an example of using it:

Update 16-9-2020: Google is flagging my site as one that serves malicous files because ExeToPosh is triggering some antivirus products (false positives). As Google doesn’t respond to my clarifications I have published the source code on GitHub. This allows everyone to ensure there is no included malware, alternatively if you do trust me you can fetch the binary from the releases section on Github.


11 Responses for "Convert Executable to PowerShell"