Case of the Crashing Task Scheduler

After a while I noticed a problem with the Task Scheduler: when I wanted to open the “Schedule Tasks” option from settings I received the following error message:

I opened the Services snapin and noticed that the Task Scheduler was not running. Attempting to start it would either result in immediate crash with Error 1067 or crash shortly after starting:

The System eventlog didn’t provide any helpful details other than notification that the service terminated unexpectedly: 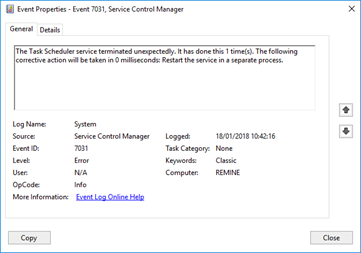 Next step was to check the Event Log for the Task Scheduler which is located under Application and Services Logs | Microsoft | Windows | TaskScheduler | Operational. Note that this log needs to be enabled: 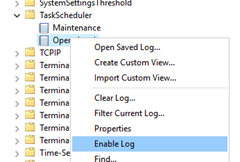 I checked the corresponding xml file in C:\Windows\System32\Tasks\Microsoft\Windows\.NET Framework\.NET Framework NGEN v4.0.30319 64 Critical and compared it to a working system and there were no differences.

Next attempt was to delete the TaskCache registry key which is located under HKLM\SOFTWARE\Microsoft\Windows NT\CurrentVersion\Schedule\TaskCache.

Before you do this make a backup or simply rename the key!

You need to take ownership of this registry key by opening Permissions by right clicking on the key and taking ownership by clicking Advanced and then Change next to Owner (System by default). Set the Owner to be either Administrators, click OK and tick “Full Control” for Administators.

I used the Repair Tasks tool from this link and clicked Scan followed by Repair:

Finally that fixed it!