Various Citrix knowledge base articles refer to a tool called TraceView.exe to view the output of diagnostic traces.

CTX106233 describes where to download traceview but this article is outdated because it describes an older version of the DDK (the Windows Driver Development).

END_OF_DOCUMENT_TOKEN_TO_BE_REPLACED

Problem
When a opening an Excel workbook from Sharepoint the whole session freezes.

I asked the user to open an Excel workbook from Sharepoint and I noticed the following popup:

So my first thought was that the user somehow clicked this message to the background and IE was waiting for a response.

END_OF_DOCUMENT_TOKEN_TO_BE_REPLACED

The Citrix Online Plugin has a number of settings that can be changed. This includes things as Window Size and Color Depth: 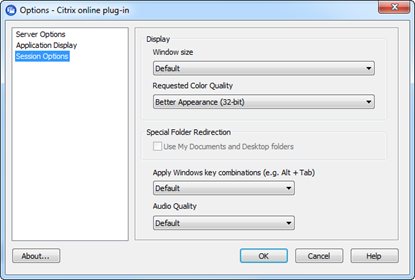 In my case I wanted to preset the Window size to Full Screen so using Process Monitor I checked where the Online Plugin writes this setting. I Used a Filter that includes only the Online Plugin (PNAMain.exe) and the RegSetValue Operation: 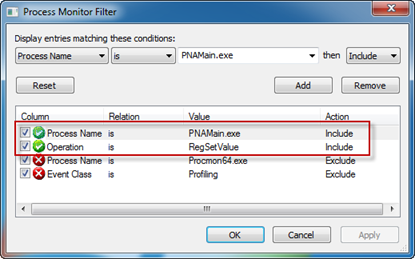 END_OF_DOCUMENT_TOKEN_TO_BE_REPLACED

Today I was troubleshooting the application “Harmony Client” which crashed upon exiting:

The application had been thinapped and the error only appeared when starting the thinapped version.

END_OF_DOCUMENT_TOKEN_TO_BE_REPLACED

The video below shows a Proof of Concept of bypassing Application Security in RES Workspace Manager .

Please note that at this time the code is not publicly available so please don’t ask for it.

EDIT 2: I added a video that I received from someone who tried my Excel Sheet with AppSense Application Manager.

EDIT: I wanted to clarify a couple of things regarding this post.

First of all I would like to explain why I wrote this code and why I choose to test it with RES WM.

I had the idea about this approach a long time ago but I never got around to actually do it. The main reason was that I needed to convert Delphi code to VBA and especially converting some Windows headers was a lot of work. Then suddenly I noticed that someone had already converted the headers, so I all I had to do was rewrite the code that used it to VBA.

The choice for RES was made because of two reasons:

I would like to emphasize that RES contacted me very quickly after publishing this blog. I’ve had contact with RES and they showed a very constructive approach with their primary goal being a fix or guidance for their customers. Hats of to RES taking a constructive approach and I will be working together with RES on this issue.

Finally I would like to state that I didn’t expect this post to draw this much attention, if I did I would have probably taken another approach.

END_OF_DOCUMENT_TOKEN_TO_BE_REPLACED

I took a look at the profiles first and noticed that the size growth was due to a Xerox subfolder in %APPDATA%:
END_OF_DOCUMENT_TOKEN_TO_BE_REPLACED