Archive for the ‘Delphi’ Category

END_OF_DOCUMENT_TOKEN_TO_BE_REPLACED

1) In case we login the user, we just call LsaLogonUser to get the token:
END_OF_DOCUMENT_TOKEN_TO_BE_REPLACED

But there are some practical problems which I will describe here.

1) I use the LsaLogonUser function to log in the user. However, if I do not pass not null for the LocalGroups parameter, msgina.dll fails to process the logon.

Why? Because it looks for the SE_GROUP_LOGON_ID SID and treat it as logon SID. So we have to add the logon SID manually:
END_OF_DOCUMENT_TOKEN_TO_BE_REPLACED

The pipe format is described in this structure:
END_OF_DOCUMENT_TOKEN_TO_BE_REPLACED

END_OF_DOCUMENT_TOKEN_TO_BE_REPLACED

Just a quick note: if you want to determine the page size of the OS (Windows) you can use the GetSystemInfo function.

Note that MSDN recommends to use the GetNativeSystemInfo function when running in a 32 bit app on an x64 OS (and you can use the IsWow64Process function to determine that).

One example where you need to know the PageSize is when you want to create a Paging File using the NtCreatePagingFile function because this function requires that the MinimumSize and MaximumSize parameters are a multiple of the PageSize.

Some interesting links on the subject:

As you may know, you can enumerate processes of a specific Terminal Server or Citrix session using the NtQuerySystemInformation function.

On x86 system the code below works fine:

The problem is that RetLength is always SizeOf(SYSTEM_SESSION_PROCESS_INFORMATION) and thus we are in an endless loop!

END_OF_DOCUMENT_TOKEN_TO_BE_REPLACED

I was writing a test program that will perform some actions when a USB Memory Stick is inserted.

When this happens Windows send a Broadcast a WM_DEVICECHANGE message.

The wParam member of this Message contains a (pointer to) a DEV_BROADCAST_HDR structure.

if the dbch_devicetype member of this structure is of type DBT_DEVTYP_VOLUME then we can cast the structure to DEV_BROADCAST_VOLUME.

And finally the dbcv_unitmask member of that structure returns a Bitmask containing the Drive Letter.

A fast and convenient method to convert this Bitmask to a Drive Letter (the first found) is the function below:

Have you developed an application that accesses files and may stop because a file cannot be accessed but you need to?

Since Windows Vista it is possible to find out the name of the application which holds open a file.

And we have created aÂ solution for youÂ that doesn’t require a driver, nor does it need Administrator rights! Just plain user source code for you to use instantly.

We have developed a solution in Delphi that can show your user which application stalls your application. Look at these screenshots: 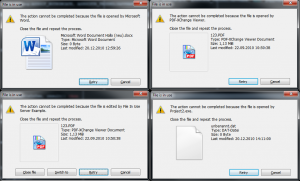 In fact, these dialogs are only for demonstration purposes. But you can get them in addition as a Delphi project!

The code itself is fairly easy to use. We have developed an extension to the official IFileIsInUse Interface from Microsoft.

All you have to do it to call this function provides by us:

The name of the app is returned by the method GetAppName. And if the other application supports IFileIsInUse (call method GetCapabilities) interface you even can close the file or switch to the window.

Youâll see how it works in the demonstration project (images above) accompanied by the function GetFileInUseInfo.

Currently, we only offer a Delphi solution. C++ may available in future or when there’s enough demand for it.

Please use the Contact Form to get more information about how to obtain the solution and conditions.