Archive for the ‘Delphi’ Category

If you read the MSDN documentation of WM_KEYDOWN and WM_KEYUP you can see that those message require us to interpret lParam as a bitfield:

I was looking for a convenient way to get and read the bits and this is what I made up:
END_OF_DOCUMENT_TOKEN_TO_BE_REPLACED

I’m working on a new build of TSAdminEx for which I need to query the total amount of physical memory. Locally we can use the GlobalMemoryStatusEx API but there’s no API to do this remotely. It would be possible using WMI but I decided not to use that because I dislike it because of it’s slowness and I need support for older OS versions which might not have WMI.

So I found in the registry the following key:

It has a value .Translated of type RES_RESOURCE_LIST which seems undocumented besides stating that it exists. Regedit knows how to handle it though. If you doubleclick on the key you will see something like this:

END_OF_DOCUMENT_TOKEN_TO_BE_REPLACED

In part 1 I showed how to create and open objects in Terminal Server Sessions. However, these are not all of the possible places where you can place objects via documented kernel32.dll functions.

If we look into Winobj again, we notice, that every BaseNamedObjects directory has a subdirectory named Restricted. To be honest, I do not know why it’s created; it’s security allows object creation for LocalSystem and RESTRICTED special user (in windows 2000, Everyone can also create objects in it). So, we can use it as prefix for object creation, for example, Restricted\MyAppEvent: 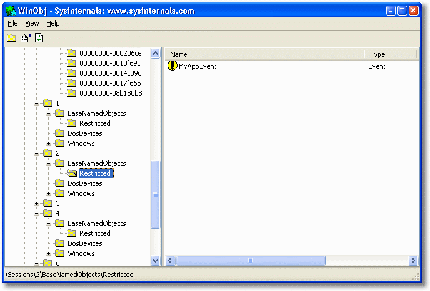 Of course, you can still use Global, Local, or Session links END_OF_DOCUMENT_TOKEN_TO_BE_REPLACED

As you know, many kernel32.dll functions, which are working with named objects, like OpenEvent, can be used to work with global and local objects. So what are global and local objects? Global objects are created in session 0 and are actually located in the \BaseNamedObjects directory, while local objects are created in the caller’s session (for example in the \Sessions\5\BaseNamedObjects directory (for session 0, global and local has no meaning since they point to the same object)). MSDN says that you can access only the objects in your own session(via the Local\ prefix) and in session 0 (via the Global\ prefix). But what if you need to access an object in another session? END_OF_DOCUMENT_TOKEN_TO_BE_REPLACED

In part 1 I showed how winlogon.exe registers its process and main window handle.

Win32 API provides only 1 function for locking workstation, named LockWorkstation. What does it do and how we can use it?

When a new session is started, smss.exe invokes winlogon.exe. It registers its process id in win32k.sys by calling RegisterLogonProcess. It has this prototype: END_OF_DOCUMENT_TOKEN_TO_BE_REPLACED

Converting a volume name to a device name

Windows has a couple of different formats for volume names but it is unclear how to convert a Volumename (example: \\?\Volume{GUID}\) to a DeviceName (example: \Device\HarddiskVolume1).

I found at that you can use the QueryDosDevice function but you need to remove the preceeding \\?\ and the trailing \ of the VolumeName:

At first, we need to create a named pipe with a unique name. Let’s construct the pipe name using a GUID – this should be unique, but we can do it in a cycle to be absolutely sure: END_OF_DOCUMENT_TOKEN_TO_BE_REPLACED 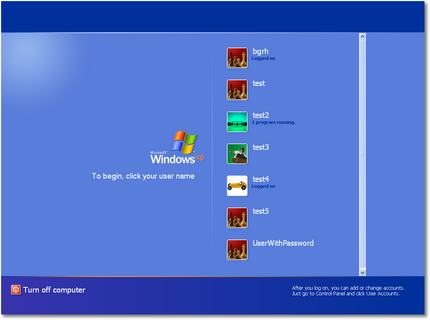 END_OF_DOCUMENT_TOKEN_TO_BE_REPLACED

Hello, my name is Danila Galimov and i will write here sometimes ð

and loads the required dlls (winsrv.dll in our case). Initialization of winsrv.dll creates a thread, which connects to SmSsWinStationApiPort port and does the loop for processing Terminal Server messages until it receives WinStationTerminate message.