Windows XP X64 shares the same binaries with Windows 2003 X64, but Terminal Server has some restrictions on XP. This article shows you how to get rid of them and is based on cw2k ideas from the original Windows XP Terminal Server patch.

1) Winlogon.exe contains a function, called EnumerateMatchingUsers which in turn calls IsProfessionalTerminalServer function. We need to patch this function to return zero (false):

END_OF_DOCUMENT_TOKEN_TO_BE_REPLACED

On a Citrix or Terminal Server you will want to disable autoupdate notifications of the flash player.

This can be done by creating a file mm.cfg in the folder where the flash ActiveX control is installed (normally C:\Windows\System32\Macromed\Flash).

Place the following line in this file (with a text editor like Notepad):

Be sure to save the file with UTF-8 encoding, this can be selected in the Save As dialog in Notepad:

Ofcourse you are aware that only certain Flash versions are supported (and optimized) in Citrix? At this time these versions are: 7a, 8, 8b, 9, 9c, and 9d.

Converting a volume name to a device name

Windows has a couple of different formats for volume names but it is unclear how to convert a Volumename (example: \\?\Volume{GUID}\) to a DeviceName (example: \Device\HarddiskVolume1).

I found at that you can use the QueryDosDevice function but you need to remove the preceeding \\?\ and the trailing \ of the VolumeName:

One of the side effects of using sysprep to prepare an image is that drive letter assignments are reset to default. This behaviour is documented in a knowledge base article.

I previously solved this by running a diskpart script but that needed a custom script for each system (if the disk or partition order differs the script needed to be adjusted). So I needed to run a restore with sysprep determine the drive layout after sysprep, change the script, test by restoring again. So I wrote a commandline tool that can change a drive letter assignment based on the volume label.

END_OF_DOCUMENT_TOKEN_TO_BE_REPLACED

A while ago I published a patch for Windows 2003 Terminal Server that allows more than 2 concurrent sessions in Remote Administration mode.

Today I publish the same patch but for Windows Server 2003 X64. The patched function (CRAPolicy::Logon) is the same as in the original patch.

END_OF_DOCUMENT_TOKEN_TO_BE_REPLACED

Up until now I used VPatch for all my patches. The disadvantage of VPatch is that it uses strict MD5 hash checks. This means that a patch can only be applied to exactly the same file the patch was based on (exact same build and language).

Because many people are asking for patches for other builds and languages I decided to move over to another patch mechanism. This will use search & replace on specific Hex bytes.

The consequence is that patching another build or language version is possible. However there is no absolute certaintity that the patch will work on other builds or languages. Ofcourse the patcher will only patch if the specific bytes were found which is safer than patching an offset.

It’s up to the user to carefully test the patched file and hopefully report back to me if it’s working.

Now I will describe how to use this universal patcher.

END_OF_DOCUMENT_TOKEN_TO_BE_REPLACED

So I will be attending the Tech-Ed EMEA in Barcelona, maybe some of you are going too?

It would be nice to meet some of my readers, so maybe I’ll see you there!

I had an application that crashed when opening the Help Topics entry from the Help menu. A trace with Process Monitor showed that it was opening a help (.chm) file. Using Explorer I could normally open the Helpfile so thas was strange. Process Monitor did not reveil any ACCESS_DENIED or other problems.

END_OF_DOCUMENT_TOKEN_TO_BE_REPLACED

Registry editing has been disabled by your administrator (not anymore!) 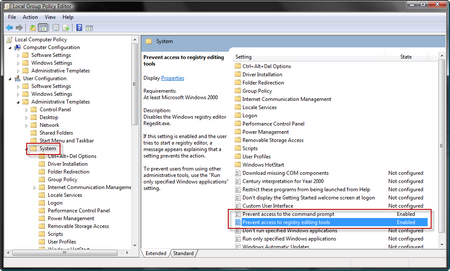 Activating the policies will set the matching keys in the registry: 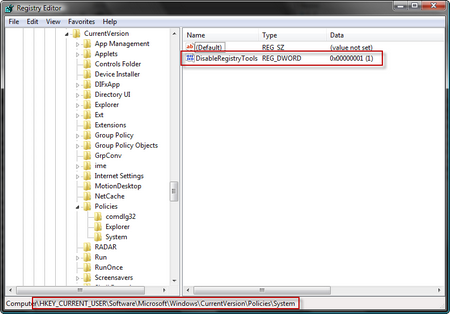 If we try to open regedit we are denied access:

So how does this work? END_OF_DOCUMENT_TOKEN_TO_BE_REPLACED

If you ever download software from Microsoft’s Volume Licensing Site you have probably seen that it uses the Akamai download manager. Sometimes your downloads get interrupted but how to restart the downloadmanager? There’s no entry in the startmenu and not even an icon on the desktop.

You can restart the downloadmanager though by creating a shortcut to “C:\Windows\DOWNLO~1\CONFLICT.1\Manager.exe”. Please notice the short directory name (~1).