Archive for the ‘PowerShell’ Category

After changing AWS accounts I resetup my API key so I could use the AWS PowerShell CmdLets.

However even though I was sure I configured everything correctly I couldn’t call any EC2 cmdlet. More about that further below but let’s refresh how to setup an API key for PowerShell:

The procedure to do this is quite simple:

First you create an IAM user (go to Services | IAM) then in the left treeview select Users or use this direct link. 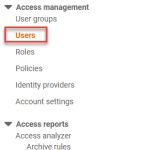 In the next screen select the appropriate permissions, in this screenshot I’m using AdministratorAccess but this of course means you’re giving this user the permissions to do absolutely anything.

So have a good look at the minimum permissions that you actually require. 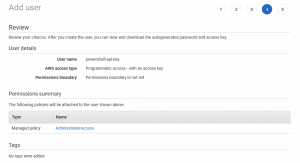 END_OF_DOCUMENT_TOKEN_TO_BE_REPLACED

So I decided to wrap signtool.exe in a PowerShell cmdlet as PowerShell also makes it easy to locate the correct code signing certificate from the certificate store. END_OF_DOCUMENT_TOKEN_TO_BE_REPLACED

END_OF_DOCUMENT_TOKEN_TO_BE_REPLACED

Took me a little while to realize that this doesn’t work as the split operator in Windows PowerShell uses a regular expression in the delimiter, rather than a simple character.

The easy fix is to Escape the $ sign with a backslash:

Or alternatively use the SimpleMatch option:

END_OF_DOCUMENT_TOKEN_TO_BE_REPLACED

This morning Aaron Parker was wondering if Hash Tables could be used to work with ini files:

I thought it was a great idea because in Hash Tables you can use the . operator to get or set a Hash Table entry. But I wondered what to do with sections in ini files. Then I got the idea to use nested Hash Tables for that.

The result is two functions, one to read an ini file into a nested Hash Table and one function to write it back to an ini file.

END_OF_DOCUMENT_TOKEN_TO_BE_REPLACED

Sorting a hashtable by byte value in PowerShell

In a PowerShell script I needed to sort a hash table by byte value (not alphabetically, lowercase parameters will be listed after uppercase ones). An example for this requirement is the Amazon Product Advertising API.

Consider the following hashtable as an example:

If we use the Sort-Object to order the list (note that we need to use the GetEnumerator method):

We will get the following result:

If you use the -CaseSensitive switch the resulting order will remain the same.

END_OF_DOCUMENT_TOKEN_TO_BE_REPLACED

To get the best performance out of Virtual Desktops it is essential that the power configuration in the system BIOS and the HyperVisor are configured for maximum performance.

Many people have blogged about the importance of these settings like, Andrew Wood, Helge Klein and Didier Van Hoye. So I will not go into details again.

But how do you check from a Virtual Machine if you are actually running at full clock speed or not?

I have written a PowerShell script to do just that (requires at least PowerShell v3).

Here are some screenshots: