Archive for the ‘script’ Category

A while ago I published a tool to Encode and Decode Citrix passwords. Today I am publishing a small update to this tool that makes it scriptable by adding a COM interface.

If you start the tool without parameters you will get the GUI, just like before:

To use the COM interface you first need to register the executable with the /regserver switch:

After the registration you can call it using any language that supports COM. To get you started I wrote a few examples

END_OF_DOCUMENT_TOKEN_TO_BE_REPLACED

Yesterday I wrote about troubleshooting an application that used Com Port redirection in Citrix.

During the troubleshoot I noticed that the application used an ActiveX component, MSCOMM32.OCX, for serial communication.

I wanted to quickly test if the component was correctly registered so I searched the registry from HKEY_CLASSES_ROOT for mscomm32.ocx.

END_OF_DOCUMENT_TOKEN_TO_BE_REPLACED

Switching to the Services Session

Just read a tweet from @andyjmorgan about Interactive Service Detection. This made me remember that it’s possible to switch to the Session 0 with an undocumented api in winsta.dll.

For this API to work you must have the Interactive Services Detection (UI0Detect) service running.

END_OF_DOCUMENT_TOKEN_TO_BE_REPLACED

Script to Get Computer OU

Just some quick code to get the OU Name of the computer we run the script on.

Get the location of an advertised shortcut

Installers can create so called Advertised Shortcuts in the Start Menu. I wanted to check the Target Path of such an shortcut but Explorer doesn’t show it: 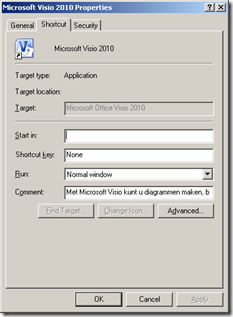 END_OF_DOCUMENT_TOKEN_TO_BE_REPLACED

I was creating a small dialog in an .hta file and to make a little prettier for the user I included a company logo: 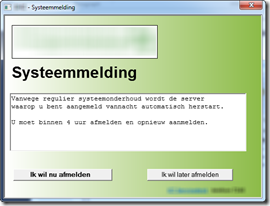 But I wanted to deploy the .hta as a single file.

END_OF_DOCUMENT_TOKEN_TO_BE_REPLACED

Yesterday I needed to set a few registry keys remotely from a 32 bit windows machine to a 64 bit machine.

I used reg.exe to set the key but even though it returned success the key wasn’t altered.

As I suspected the key was written to the Wow6432Node. In the help I couldn’t find any switch to force reg.exe to use the 64-bit view.

But luckily reg.exe has a switch (that is not listed in the help) to force the View:

END_OF_DOCUMENT_TOKEN_TO_BE_REPLACED

When the value is set to 1, and LogonType key is also set to 1, it allows you to use a Friendly UI on a computer joined in a domain:
END_OF_DOCUMENT_TOKEN_TO_BE_REPLACED