Archive for the ‘script’ Category

Unattended Installation of IBM System i Access for Windows

Today I needed to script the installation of IBM System i Access for Windows (formerly called IBM Client Access).

With older versions of this client (up to 5.4) you could use the -r (record) installer switch to record the install in a setup.iss file but version 6.1 uses an MSI based installer.

IBM offers the client in a 2 DVD download but you probably only need the first dvd (dvd 1 has both the x86 and x64 installers, dvd 2 has the ia64 installer) which is a whopping 3,5 GB download.

Inside the download (a zip) is an iso file of which you will only need the files in the root and the Image32 or Image64a folder.

Inside the image folder are subfolders names MRI29xx where xx is a language identifier:

The following Identifiers are used: END_OF_DOCUMENT_TOKEN_TO_BE_REPLACED

Yesterday I was packaging an application called Kluwer Juridische Bibliotheek. When the user first starts this application a screen with the License Conditions pops up and it must be accepted: 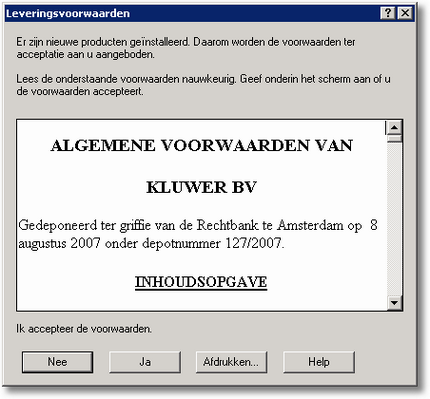 I always try to remove such things as I don’t think it’s necessary for every user to accept it.

END_OF_DOCUMENT_TOKEN_TO_BE_REPLACED

I use the Microsoft.XMLDom object in the script the create the XML and I think the code is easy to understand so I will just show it here: END_OF_DOCUMENT_TOKEN_TO_BE_REPLACED

The messaging interface has returned an unknown error

Today someone asked questions about a script I wrote back in 2007 to solve a bug in Outlook (2003 but at least Outlook XP has the same issue). If you have access to someone’s calendar and want to make a print of it Outlook wants to print it in it’s default view which is a combined view on calendar appointments and tasks. However if you do not have permissions to the other persons tasks folder Outlook refuses to print and displays the following error: The messaging interface has returned an unknown error. If the problem persists, restart Outlook.

To resolve it you can go to the Calendar | Daily View | Print, then click Page Setup and under Include Options deselect Taskpad. I didn’t want to do this for all users that’s why I wrote the script.

END_OF_DOCUMENT_TOKEN_TO_BE_REPLACED

Unattended Citrix Installation: Could not Access the datastore using the DSN file

I was working on an unattended installation of Citrix Presentation Server 4.5 or rather Citrix Xenapp. I was creating the dsn file for the installation by a script that uses the echo command and output this to a file.

This is a part of the script:

Even though the generated DSN file looks ok the installation fails. If you look in the installation log you can see this error: Error 26009. Could not Access the datastore using the DSN file.

I then created a dsn file through the ODBC Data Source Administrator and then the installation went ok. I compared the DSN file with the one my script generated and it was the same.

A search with Google and in the Citrix forums leads to numerous posts with the same error but none with a real solution. Some suggestions are that you need to remove the WSID line or even the order of the entries in the DSN file. But none of these suggestions work.

So I compared the two files again and I noticed that the filesize of my generated DSN was slightly bigger. So let’s look again at the script:

See the space right before the >>? This means that after each line in the dsn file there’s a space too. If you open the file with a Hex Viewer you can easily see the spaces (ASCII value 20):

So the solution is to change this (for all lines) to:

After that it works perfectly!

Dirk Schmitz send me his Python version of encrypting the RDP Password: