Archive for the ‘SQL Server’ Category

END_OF_DOCUMENT_TOKEN_TO_BE_REPLACED

Last time I showed a User Defined Function to the Full Path of an Altiris Job given it’s id (event_id). Note that Altiris calls a Job an Event so the terms Event and Jobs are interchangeable here.

To complete it we first need to prepend the server and share name to the path.

I looked into the Altiris database tables to find the best place to get the servername and it seems that the hostname column of the mmsettings table is a good way.

In my database there was only one row in the table but I restrict the results by adding top 1:

Then I looked into the available tokens for one that returns a job id but we can only return a job name or a computer id. Since a job name is not unique I decided to use the computername and find the active job for this computer.

When a Job is scheduled an entry is added to the event_schedule table. If you look into this table you will notice a column status_code which is NULL initially and when the job start it will get a value of -1 which indicates the job is active.

When the job has finished the status will always be 0 or higher. END_OF_DOCUMENT_TOKEN_TO_BE_REPLACED

Earlier I described a SQL Query to get the Full Path of an Altiris Job, today I will describe how we can make a User Defined Function (UDF) in SQL so we can call it easier.

I am using an UDF because it allows us to specify parameters, in this case a single parameter (the EventId (or job id).

This is the SQL that creates the UDF:

END_OF_DOCUMENT_TOKEN_TO_BE_REPLACED 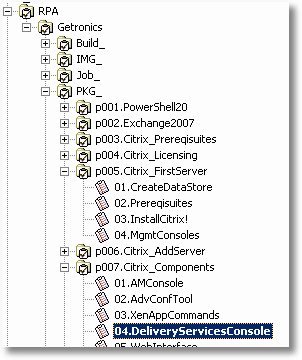 END_OF_DOCUMENT_TOKEN_TO_BE_REPLACED

So why did I write it? Well I have divided my Jobs into Prerequisites and Packages, for instance IIS and Terminal Server and Java are prereqisuites for Citrix. But many prereqisuites are required for one or more other packages, eg Java is also used for certain applications. END_OF_DOCUMENT_TOKEN_TO_BE_REPLACED

Therefore I made a VBS script that clears SQL transactions logs, an option would be to schedule this as a post backup job.

This is the script: