END_OF_DOCUMENT_TOKEN_TO_BE_REPLACED

The case of the COM Port Redirection

One of my colleagues asked me to assist in troubleshooting an application called SmartWare FM running on Citrix XenApp.

This application reads data from an external device called SECUTEST.

The device is connected to a COM port which is redirected to the XenApp session. In contrast to Microsoft Remote Desktop Services COM ports are not automatically redirected in XenApp but need to be mapped via eg a logonscript (NET USE COM1: \\Client\COM1:) or using UEM.

In my case the COM port was mapped with RES Workspace Manager:

END_OF_DOCUMENT_TOKEN_TO_BE_REPLACED

I noticed something interesting today: I needed to generate a Code Signing certificate from a Windows 2003 CA Server.

However the default Code Signing Template does not allow us to export the private key. I found a nice trick however that enables us to request a code signing certificate WITH private key. 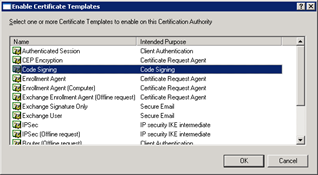 END_OF_DOCUMENT_TOKEN_TO_BE_REPLACED

I am using a PowerShell script to copy some elements of from the users old profile location to a new location. This includes the Nethood ("My Network Places") folder which contains the Network Places shortcuts.

I started comparing the old Nethood folder to the new and observed the following difference in Explorer:

END_OF_DOCUMENT_TOKEN_TO_BE_REPLACED

Today I was troubleshooting a message that appeared when a user tries to edit a document from SharePoint on a Citrix XenApp server.

The user browsed to a word document on Sharepoint and selected “Edit in Microsoft Office Word” from the Combobox:

This would present the following error message to the user:

END_OF_DOCUMENT_TOKEN_TO_BE_REPLACED

Problem
When a opening an Excel workbook from Sharepoint the whole session freezes.

I asked the user to open an Excel workbook from Sharepoint and I noticed the following popup:

So my first thought was that the user somehow clicked this message to the background and IE was waiting for a response.