END_OF_DOCUMENT_TOKEN_TO_BE_REPLACED

As you may know, you can enumerate processes of a specific Terminal Server or Citrix session using the NtQuerySystemInformation function.

On x86 system the code below works fine:

The problem is that RetLength is always SizeOf(SYSTEM_SESSION_PROCESS_INFORMATION) and thus we are in an endless loop!

END_OF_DOCUMENT_TOKEN_TO_BE_REPLACED

The case of the Annotations Toolbar

I got some interesting questions from a user today regarding TIFF images on a Windows 2003 based Citrix environment.

This user has an application that works with scanned documents and for each document exists both a pdf and a tiff version in the application.

By default the TIF (and TIFF) file extensions are linked to the Windows Picture and Fax Viewer in Windows 2003.

The user told me that some time ago she had an extra toolbar where she could perform some extra operations such as making a selection on TIFF images.

At some point in time this mysterious Toolbar disappeared and she was never able to get it back. She reported this to the helpdesk and the system administrator but they were unable to resolve this.

I hadn’t hear of this toolbar before but a Google Search led me to this page which explains the toolbar in question which is called the Annotation Toolbar.

END_OF_DOCUMENT_TOKEN_TO_BE_REPLACED

I often hear that people configure the Paging File (on Citrix or Terminal Servers) on a seperate volume but, the reasons is either performance or the chance that the Paging File might corrupt the volume.

However if at some point you would like to create a Memory Dump you must have a paging file on the boot volume.

For a Small memory dump you need at least 2MB Paging File on the Boot Volume but for a Full Memory Dump you need a Paging File that is sufficient to hold all the physical RAM plus 1 megabyte (MB).

Side Note: with the increasing ram of today’s servers, how long does it take for a full memory dump to be saved when you have lots of gigabytes?

If you are implementing a Citrix, Terminal Server or even just a plain Client-Server environment you will need to create a Default User Profile at some point.

The Default User Profile can be thought of as the initial registry settings that are used when a new profile is created.

END_OF_DOCUMENT_TOKEN_TO_BE_REPLACED

Today I shadowed a user’s session in Citrix and when I wanted to type something I noticed that the keyboard layout was incorrect.

This is and old “friend” that I always tend to forget about. So hopefully this post will help me to remember it :D.

You can prevent this by adding a value “IgnoreRemoteKeyboardLayout” to the registry key HKLM\System\CurrentControlSet\Keyboard Layout:

END_OF_DOCUMENT_TOKEN_TO_BE_REPLACED 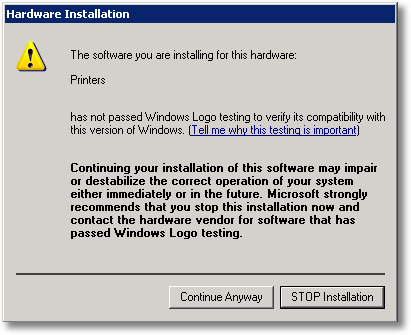 So this means I needed to script turning off Driver Signature Warnings. A quick search led me to kb article kb298503 which is titled “Driver signing registry values cannot be modified directly in Windows“. As you may guess that title drew my attention. END_OF_DOCUMENT_TOKEN_TO_BE_REPLACED