Archive for the ‘Windows Internals’ Category

Invalid file handle when trying to delete a file

When I was trying to delete a folder from my local harddrive (cygwin64 in my case) I got the following error message: “Invalid file handle.“:

I then attempted to delete the folder from the command prompt which failed as well with an “Access is denied” error:

END_OF_DOCUMENT_TOKEN_TO_BE_REPLACED

I am using a PowerShell script to copy some elements of from the users old profile location to a new location. This includes the Nethood ("My Network Places") folder which contains the Network Places shortcuts.

I started comparing the old Nethood folder to the new and observed the following difference in Explorer:

END_OF_DOCUMENT_TOKEN_TO_BE_REPLACED

This secret is stored in the registry under the SECURITY Hive: 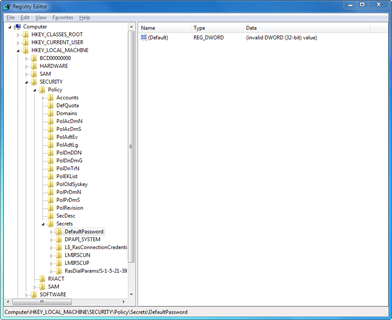 END_OF_DOCUMENT_TOKEN_TO_BE_REPLACED

1) In case we login the user, we just call LsaLogonUser to get the token:
END_OF_DOCUMENT_TOKEN_TO_BE_REPLACED

The pipe format is described in this structure:
END_OF_DOCUMENT_TOKEN_TO_BE_REPLACED

When the value is set to 1, and LogonType key is also set to 1, it allows you to use a Friendly UI on a computer joined in a domain:
END_OF_DOCUMENT_TOKEN_TO_BE_REPLACED